It’s no secret, I think we are in “YEAR SIX” of the “SIXTH 7-YEAR CYCLE”. If you scroll around this website or read my book you will figure out why that is the case. To have this conversation almost requires a new language or mind set.

To get a feel for how this looks over time take a look at the “7 Year Plan” blog post written in August of 2015, here is the link   https://7and50rhymes.com/628-2/ . As you read it think about each of the last 5 years and how you experienced them. I would be surprised if you do not see your own world experience in the rhymes described in this 5 year old post.

Allow me to lay out a few “PATTERN SIX” outlines from Genesis and Exodus.

On the “DAY SIX” of the creation narrative we are told God creates the land animals and what is obviously the zenith of the creation, mankind both male and female. The following day, the seventh, will be the Sabbath. (Genesis 1:24-31)

In Exodus on the “DAY SIX” of manna gathering the instruction is to gather double and prepare for Sabbath. (Exodus 16:22-30)

Another “SIX” that is somewhat hidden is found in the second half of Genesis.

“So the man became exceedingly prosperous, and had large flocks and female and male servants and camels and donkeys.” Genesis 30:43

Also notice the “exceedingly prosperous” if this is connected to the sixth day of manna gathering, we can expect Jacob will act accordingly gathering and preparing for a Sabbath.

What follows in Genesis 31 is clearly a “YEAR SIX” narrative, in fact the 20 years mentioned in verse 38 and again in verse 40 leave little doubt that Genesis 31 is not only set in “YEAR SIX” but also, as the below chart makes clear, the time setting is in the “Sixth 7-Year Cycle” of the 50-year Jubilee Pattern. 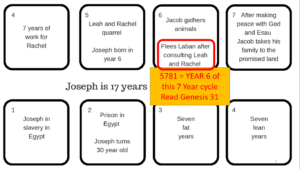 Here are a couple of key elements worthy of special attention.

Jacob, Leah and Rachel are in agreement.

Followed by an agreement and blessing.

Finally notice where Jacob is headed and what he hopes to accomplish.

As we navigate this “YEAR SIX” of the “SIXTH 7-YEAR CYCLE” remember, patterns are often relative or rhymes, not necessarily exact replicas. These patterns do a great job of guiding our decision making and helping us deal with shifts in our personal situations. Everyone will experience the next twelve months in their own unique way but I have little doubt that the patterns of Genesis 31 will be recognizable by this time next year. Those who pay attention will make decisions that will cause others without the revelatory information to scratch their heads. However, in the years that follow decisions made based on the revelations will look very wise.

We have been given a very detailed pattern for 5781. May we have the courage of our convictions!