This graphic of a nine branch candelabra, also called a Hanukiah is provided as a means to better explain Part Three of the book Know the Time, Change Your World. After almost 25 years of research in the modern historical record and personal experiences with the seven-year and the fifty-year cycle, the author’s findings where then confirmed in the times and dates of the second half of the book of Genesis. It was an understanding of the Biblical record of the 57 years, from the beginning of seven years Jacob works for Rachel, to the end of Joseph’s seven lean years in Egypt which gave the author the courage to publish his ideas based on his research and personal experiences.

The author also expects that these same events from the second half of Genesis are linked strongly to the events recorded in John 10 concerning “other sheep… who are not of this fold” vs 16 and the Feast of Dedication (Hanukkah) vs. 22. 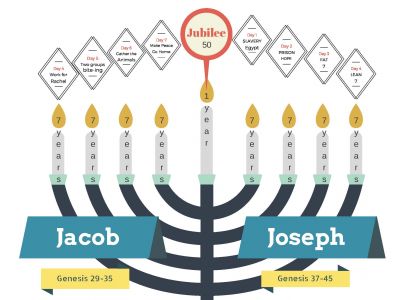