What if Rachel Lives?

If you stumble across this post with no previous knowledge of my book, “Know the Time Change Your World”, or this website, I highly recommend you spend some time with other posts on the site and ideally that you master the information in the 3rd part of the book and then return here.

For those of you up to speed, here we go!

Headed for a 50-Year Jubilee

We are now in the seventh set of seven years since 1980. If the economic markers, historical and current events we have noted are valid, then we are headed for a 50-year Jubilee starting in the fall of 2029. Which also happens to coincide with the end of a Shemitah cycle, 7 years from now. (***footnote below) There is one main thought I want each of you contemplate over the next 7 years. What if Rachel lives?

The pattern of 8 sets of seven years and a 50th year Jubilee from the second half of Genesis can be put in this chart, which is hopefully familiar by now. Notice the red outlined seven years which is the 7 years just before Joseph is sold into slavery. I propose, based on the pattern we have been studying that this is the set of seven years we are now entering. The Shemitah cycle, just before the 50-Year Jubilee. 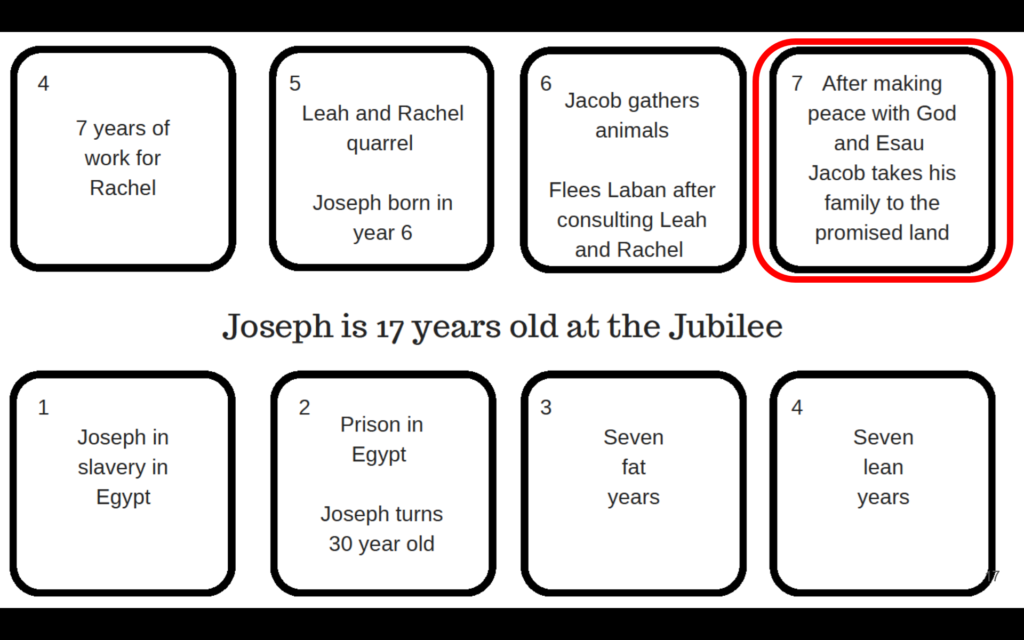 The previous 7 years had been full of anxiety but very productive for Jacob. As the sixth 7-year cycle ends, Jacob gathered his animals and his family and left Laban. Shortly thereafter he wrestled the angel and acquired a new name, Israel, and he made peace with Esau.

In this new era, Jacob and the clan will move to the promised land where they will spend the next 7 years; but Jacob will lose Rachel in childbirth on the road to Ephrat. What a loss!  Many have linked her death to her stealing and hiding of her father’s idols, as well as the pronouncement of death by Jacob on whoever was found to be holding these idols. Is there a link to the idols and Rachel’s death? Likely, and as such a very stern warning to us.

What if Rachel Had Lived?

I want to focus on what might have been. What if she had lived? Would not Joseph have been better schooled on humility and brotherhood? Would not a caring mother have noticed the attitudes of her son and his brothers? Would not Rachel have objected to the coat of many colors and understood it to be a danger to her son?

Rachel, alive and in the camp, may have also had the effect of protecting Dinah. You may recall Leah’s daughter Dinah was spending time in a neighboring town and was raped by a young man who claimed to be in love with her. Rachel may well have been able to see that danger, since she herself was a beauty who had dealt with men in her youth as well. It is not hard to project that Rachel may well have saved the family much trouble had she lived.

So why am I bringing all this up? Why would I focus on an alternative history for Jacob’s family and especially Rachel?

There is a remarkable text in the book of Jeremiah. Jeremiah has his scribe Baruch record a dream God gives him. The dream starts in Jeremiah 30:1 and concludes in Jeremiah 31:26, where Baruch will write “upon this I awakened” what follows then, to the end of the chapter 31, is Jeremiah’s take-a-ways from the dream, which include the New Covenant.

These words are repeated word for word in the book of Hebrews, chapter 8, and clearly are the basis for the Nazarene (Christian, Jesus) movement of the first century.

What is in Jeremiah’s dream?

I encourage you to learn the content of this very important dream in its historical context. Much of what Baruch is writing down seems impossible, considering the current events that are happening in the era just before the destruction of the first temple. In fact, it is not a stretch to see Israel and Judah as having no future and without hope. It is very clear why Jeremiah is known as the weeping prophet.

However, one of the key elements of Jeremiah’s dream is found, starting in verse 15 of Chapter 31.

15 This is what the Lord says:

“A voice is heard in Ramah,
mourning and great weeping,
Rachel weeping for her children
and refusing to be comforted,
because they are no more.”

16 This is what the Lord says:

Jeremiah sees Rachel weeping! In his dream, she is very much alive, very much concerned for her children. Refusing to be comforted, being of the opinion that they are no more? Now being told her children are alive and will return.

This is a key part of Jeremiah’s dream, which triggers his pronouncement of the New Covenant. His dreaming of Rachel seems to come out of the nowhere. Rachel never wept for Joseph she was long buried on the Road to Ephat by the time Joseph’s bloody coat was returned to Jacob’s camp. In fact, it is Jacob who weeps and refuses to be comforted.

33 Then he examined it and said, “It is my son’s tunic. A vicious animal has devoured him; Joseph has surely been torn to pieces!” 34 So Jacob tore his clothes, and put on a sackcloth undergarment over his waist, and mourned for his son many days. 35 Then all his sons and all his daughters got up to comfort him, but he refused to be comforted. And he said, “Surely I will go down to Sheol in mourning for my son.” So his father wept for him. Genesis 37:33-35

Jeremiah’s dream is an alternative history, something found nowhere in the Genesis text. Rachel weeping for Joseph is simply not part of the Genesis account. Just in case you don’t see Joseph in the text, Jeremiah goes on to dream of Joseph’s second born, Ephraim, the son who received the right-hand blessing from Jacob in Genesis 48. Thus, Ephraim is considered the leader of Joseph’s clan (see Ezekiel 37:16). The dream depicts Ephraim repenting, asking to be instructed and returning to God.

I have certainly heard Ephraim grieving,
‘You have disciplined me, and I was corrected,
Like an untrained calf;
Bring me back that I may be restored,
For You are the Lord my God.
19 For after I turned back, I repented;
And after I was instructed, I slapped my thigh;
I was ashamed and also humiliated
Because I bore the shame of my youth.’
20 Is Ephraim My dear son?
Is he a delightful child?
Indeed, as often as I have spoken against him,
I certainly still remember him;
Therefore My heart yearns for him;
I will certainly have mercy on him,” declares the Lord. Jeremiah 31:18-20

What then is the meaning of the reappearing Rachel?

Why does Jeremiah’s dream replace the weeping inconsolable Jacob with a weeping, inconsolable Rachel? As I stated earlier, a rewrite of the Genesis story with a living Rachel would likely have had a huge impact on the family. We all know such alternate realities cannot exist; family histories cannot be changed but the text seems to want us to consider the effect of a living Rachel. With his mother in her proper place, Joseph would have been better schooled on humility and brotherhood. The coat of many colors would not have happened, or coats would have been distributed to all the brothers. Regardless Rachel would have had a mother’s eye for her son’s safety. In many other ways Rachel’s presence would have bettered the social interaction of Jacob’s family, as I mentioned, likely protecting Dinah from a dangerous association. In fact, the whole narrative from Genesis 35 on would have improved for Jacob’s household.

Jeremiah seeing Rachel in his dream is implying something about a future redemptive cycle. Rachel and Ephraim appear very near the end of the dream. Jeremiah will give Baruch a few more lines of the dream before he awakes.

21 “Set up road markers for yourself;
make yourself guideposts;
consider well the highway,
the road by which you went.
Return, O virgin Israel,
return to these your cities.
22 How long will you waver,
O faithless daughter?
For the Lord has created a new thing on the earth:
a woman encircles a man.”

23 Thus says the Lord of hosts, the God of Israel: “Once more they shall use these words in the land of Judah and in its cities, when I restore their fortunes:

24 And Judah and all its cities shall dwell there together, and the farmers and those who wander with their flocks. 25 For I will satisfy the weary soul, and every languishing soul I will replenish.”

“Return by the same route you left” seems to be the message of verse 21; this may very well have to do with the long historical journey into exile by Joseph’s people. The mistakes they made and the correcting of those mistakes. If fact, if you have eyes for it, the Luke 15 prodigal son parable very much parallels Jeremiah’s dream of Ephraim seeking correction in verses 18-20.

Jeremiah’s Hope for the Future

In Chapter 31 verse 22 Jeremiah dreams of a new thing in the earth.  “a woman encircles a man.” The word encircle is much more than a physical encompass. It is “Strong’s H5437”, saw-bab’, and implies to turn, turn about, be brought round, change direction.

Jeremiah sees this idea of a woman turning a man around as “a new thing in the earth.” Earlier in the dream he had Baruch write. “In the latter days you will understand this.” Jeremiah 30:24b  Jeremiah is clearly not speaking of things that have been; he is speaking of things which will be, long beyond his time. He sees the hope of the New Covenant hinging on Rachel or more likely, I suspect, Rachel’s daughters.

And then, just before he awakens, Jeremiah sees Judah returned to all its cities. This also is an impossible dream in Jeremiah’s time. History tells us that 100 years earlier in the time of Hezekiah, Judah had been overrun and only the 200 acres of Jerusalem had withstood the assault by Sennacherib King of Assyria (2 Kings 16) and that only by a miracle. Now, in his days, Jeremiah knows Nebuchadnezzar will destroy Jerusalem. Yet, as with every prophecy of doom, God always gives Jeremiah hope for the future.

As the dream ends, we have three predictions for those “latter days”, when we will “understand”.  Judah will return to its cities and Joseph’s people will ask to be instructed and finally there is a “new thing in the earth” a man being turned around by a woman.

I expect this “new thing in the earth” will be the rise to influence of Rachel’s daughters, as they abandon the idols their fathers, in recent generations, have used in worship. I expect them to be shepherdesses, just as Rachel was a shepherdess when we first met her in Genesis 29. These women will be beautiful in countenance and character, with a soft heart but firm hand for direction and discipline. Finally, I expect they will see and understand their ultimate role to be mothers. They will have a great and Godly influence on their husbands, their sons and society as a whole!

In case you have not noticed, Judah has returned to many of its cities, and there is a modern movement of Prodigals returning to the ways of God asking to be instructed. As the chart above shows, if this is the redemptive cycle, if we are living in, the “Latter Days of Understanding”, then this starts now, and Jeremiah’s dream of Rachel’s influence grows larger and larger over the next 7 years. Yielding a stable, functional, household of faith. May it be so!

If not, we just go right back into slavery in about 7 years.

*** (I am sure you are tired of hearing it, but I am still open to someone explaining a different 7- and 50-year pattern.)