The Storm Before The Calm

Readers of this blog will not be surprised that I enjoy the study of geopolitics. 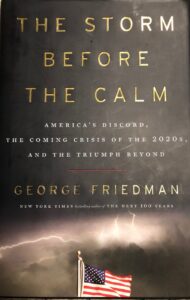 In early 2020 George Friedman’s new book The Storm before the Calm caught my eye. Purchasing and reading the book just as covid changed our world, I enjoyed Mr. Friedman’s insights so much that I signed up for his newsletter, Geopolitical Futures. His most recent post prompted me to ask for permission to repost the article here, in an effort to introduce my readers to one of our generation’s most insightful geopolitical thinkers.

Permission to repost here was granted by Mr. Friedman’s office. If you enjoy the post, I hope you will buy his book and subscribe to his newsletter.

The Election and My Book – Where We Stand

Thoughts in and around geopolitics.

I wrote a book, “The Storm Before the Calm,” a point I have beaten to death. The book is about the social, political and economic instability that will dominate America in the 2020s. This is happening and will happen in phases. The first phase was Donald Trump running for the presidency. The second phase began with the impeachment of Trump and matured with his election defeat. This past Tuesday marked the opening of the third phase: a series of elections that raised questions about whether the Biden administration could function, and whether the social principles of the progressives would be blocked and the Democratic Party caught in permanent gridlock.

The model I laid out was not a political model, in the sense that it was indifferent to personalities and political parties, as it was indifferent to issues. What it predicted was that there would be deep social divisions and constant instability, with unsustainable governments. This week’s elections were the signal of a counterattack being launched at the progressives. This has left the Biden period featuring a ruling party that has the thinnest congressional majority and is internally split. It is not clear that President Joe Biden will have the power to govern later in his term.

This is what would be expected in a transition between two cycles. The current one began with the Reagan presidency, which followed the chaos of the late 1960s and 1970s and led to the 1980s. That transition included race riots and airborne troops suppressing them; a president forced from office, whose supporters claimed that he had been forced out by a conspiracy built around the liberal media; and massive economic dysfunction, including double-digit interest rates, double-digit inflation and significant unemployment. It also included war and the Arab oil embargos. I point this out to provide a sense of the similarity of the structure of transitional periods such as the one we are in now. Race, presidential crises and economic dysfunction forced an obsolete era – one ushered in by President Franklin Roosevelt – to transit to the one ushered in by President Ronald Reagan. These presidents did not personally usher them in, but they happened to preside over them.

While the chaos of the 1970s was about issues, the real debate was between social classes, from the confrontation between the urban working class and the suburban professionals, as well as between what was called Middle America and the counterculture, and Blacks versus whites. The intensity of these divisions no longer needs to be imagined. That era had the bitter division over President Richard Nixon, and our era the division over Trump.

Transitions are marked by extreme anger and distrust between factions, and the relatively even division within factions. This week’s election focused on a Republican winning Virginia’s race for governor. More interesting is the incredibly narrow division in both Virginia and New Jersey. Analysis of how a candidate performed relative to prior elections is not the key. The key is that the election showed that the United States is in gridlock, with factions locked in mutual rage and contempt. So it was in the prior era when the radicals looked at Middle America with withering contempt and were treated in kind.

It was not a matter of which faction won. The gridlock was such that the battle continued regardless of elections. And it didn’t matter who was president – he would be hated by half of the country. And all this takes place amid a backdrop of intense economic crisis. This election may or may not have painted Biden’s future, and it might or might not have been a defeat for progressives. In either case, the war will continue until it becomes irrelevant. We are now in the third act, and historical precedent is that there will be about two additional phases after Biden leaves. Who takes over matters little. The next president will be trapped by the social reality he faces.

How will we know the transition is over? In a way, we won’t. A new president will have to solve the problem, and he will not appear to be much to look at. Before he was elected president, Roosevelt was evaluated by Walter Lippmann, the most distinguished columnist of the time: “Franklin D. Roosevelt is no crusader. He is no tribune of the people. He is no enemy of entrenched privilege. He is a pleasant man who, without any important qualifications for the office, would very much like to be President.” Reagan was commonly referred to as “an untalented actor” and someone “too dumb to understand what he hears.”

The time will come when this cycle changes and a president will emerge who will preside over it. We will know him by the contempt with which leading figures of the prior era see him. His virtue will be that he is not locked into the prior era, and he will appear a lightweight. But his coming is not here yet. History will have to grind through another eight years or so, and several presidents, before the cycle ends.

None of this has anything to do with the virtues or vices of leaders. It has to do with the passion with which we praise and hate them, and the extent to which American society mobilizes itself. The crisis comes from division and mutual contempt, and those arise from a changing America.

At the same time as the next act emerges socially and politically, I forecast a profound crisis and change in the way the federal government works. The current system emerged out of World War II and was based on the idea that experts should be responsible for, and to a great extent run, the federal government. It worked in World War II, and to a great extent, it has since worked for decades. But the solution of expert-based government poses two problems that have become unmanageable. One is that the government has become so complex that citizens have lost democratic control of the government. Their participation is seen as a disruption of expert-based decisions.

The second problem is that the experts know very limited areas superbly, and their limited view shapes their worldview. There are various areas of government, each with its own experts, each indifferent to what the others or nongovernmental experts said. The federal government, run by experts, has become self-enclosed and at the same time fragmented.

The experience of COVID-19 drove this home. The coronavirus was a medical problem, and therefore the medical experts in the medical bureaucracy had to be allowed to chart the course. Of course, the disease and subsequent medical decisions affected many dimensions of life. For the medical bureaucracy, limiting the extent of the virus and resulting deaths was the overarching concern, and as more was learned, the methods shifted. The expectation was that the public would accept the science as it was put. This has been the core concept of the federal government since World War II.

The problem with this system derived from the fact that the medical profession was indifferent in principle to the non-medical consequences. There were many, but we can see the problem with the massive economic disruption caused by COVID-19 and the medical solution. Closing down parts of society, imposing social distancing, attempting to impose a single medical order on a diverse society – all of this led to disruptions, the most dangerous of which are the massive, global economic shortages. There are shortages of workers, shortages in transport and a massive supply chain breakdown. Just as COVID-19 is complex in cause and effect, so is the economy. Some (including me) warned that the medical solutions would generate some variety of economic crisis and massive social tension. Many things can cause death and suffering, but the singular focus of the medical bureaucracy caused it to ignore non-medical consequences.

Make no mistake: This was their job and they did it as well as they could. But they were forced by the principles of the post-WWII system of government to focus on the medical problem. Meanwhile, experts in economics and social issues tried to point out the danger, but the power of the medical experts defined the matter. The dangers of a badly damaged economy, and the unwillingness to acknowledge any value in the social resistance to their solutions, created a single, focused solution to an enormously complex and varied problem. This was a medical problem, but it was not only a medical problem. It was not, as many believe, the fault of the medical experts. The federal system made this their singular focus, unable to see the needed trade-offs. “Trust the science” meant trust the scientists and ignore other dimensions of the problem.

The COVID-19 crisis was one I did not anticipate when I wrote my book, but it is the perfect embodiment of the problem that was arising. Government by experts who ignore experts in other fields was the discipline needed to win World War II and the Cold War. It had reached its reductio ad absurdum by 2020.

The social and economic crisis is now in the midst of painfully clearing the way to the future, and the experience of COVID-19 and its non-medical consequences will merge into the social and political upheaval of our time. We are not near the end, nor is the shape of the end clear. We have, however, passed through the first act, the Trump presidency, and into the Biden phase, which repudiates what went before. The hint of Biden’s fate, like Gerald Ford’s, was visible well before these elections, just as the value of isolated expertise is visible. But we still have about eight years to go if prior transitional phases – going back to Andrew Jackson – hold true.

I remain confident the republic will come through stronger for the pain, on the principle that what does not kill me makes me stronger. But I continue to believe the next years will remain painful, hostile and confused. This is the United States.

Here is a link to www.geopoliticalfutures.com